I learned of the 2021 Haiti earthquake when my phone began to buzz just past 7 a.m. on Sunday morning. A colleague I had worked with in Haiti told me the news – that the Caribbean island had just been hit with a massive earthquake, registering 7.2 – an even stronger magnitude than the devastating quake of 2010. My heart dropped as I whispered, “Lord have mercy.” 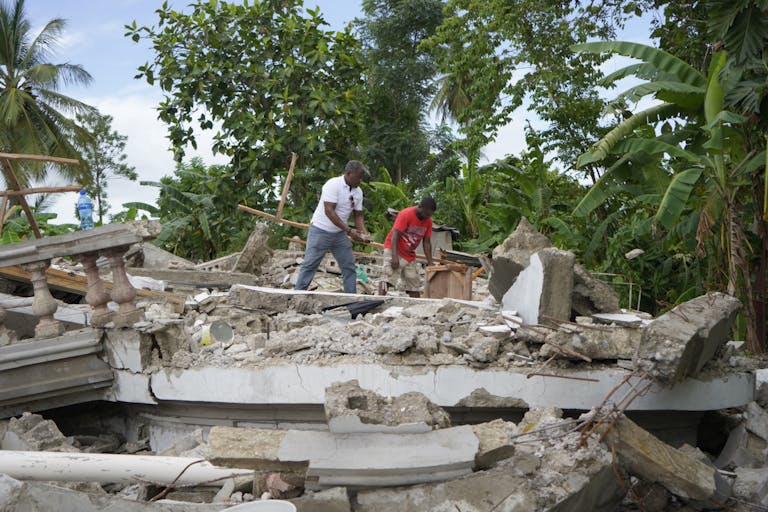 The 7.2-magnitude earthquake destroyed homes and buildings. Now begins the long process of picking through the pieces.

The FH Haiti team has been in the disaster zone providing critical life-saving assistance, such as food, clean water and emergency supplies. You can support these efforts through prayer and giving. Your gift will rush lifesaving supplies to devastated communities. 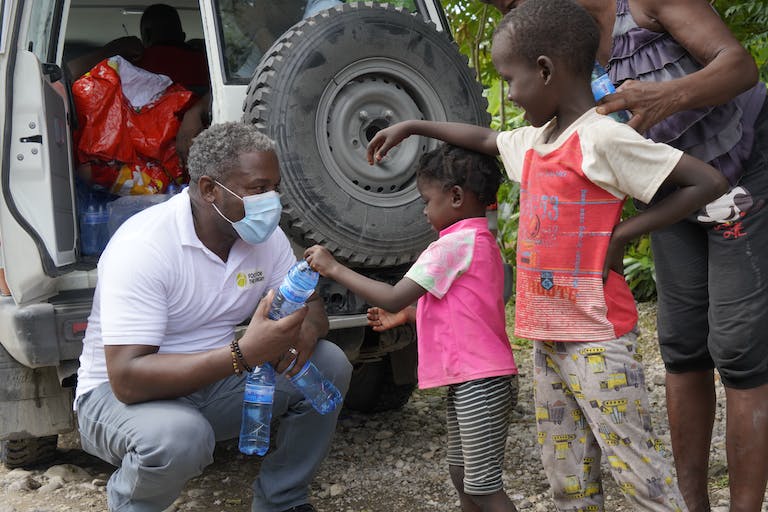 The FH Haiti team has been in the disaster zone immediately following the earthquake. They are working tirelessly to provide food, clean water, and emergency supplies to children and families in desperate need.

This massive natural disaster will surely set Haiti back once again with a high death toll and crippling destruction. To complicate the trauma, tropical storm Grace arrived within 72 hours, with flooding rains and life-threatening mudslides that left the vulnerable and newly homeless exposed while it hampered rescue and recovery efforts.

Two Disasters At Once

It feels impossible to fathom how already-struggling Haiti could be hit with two natural disasters in just a few days. Images of desperate Haitians wading through floodwater and rubble, and sleeping under tarps and makeshift tents, paint a distressing reality for those who have already lost so much.

The situation begs us to reckon with the unimaginable circumstances others must endure. It is estimated that 1.2 million people are impacted by the current disaster ­– with the death toll topping 2,000 and climbing higher each passing day. 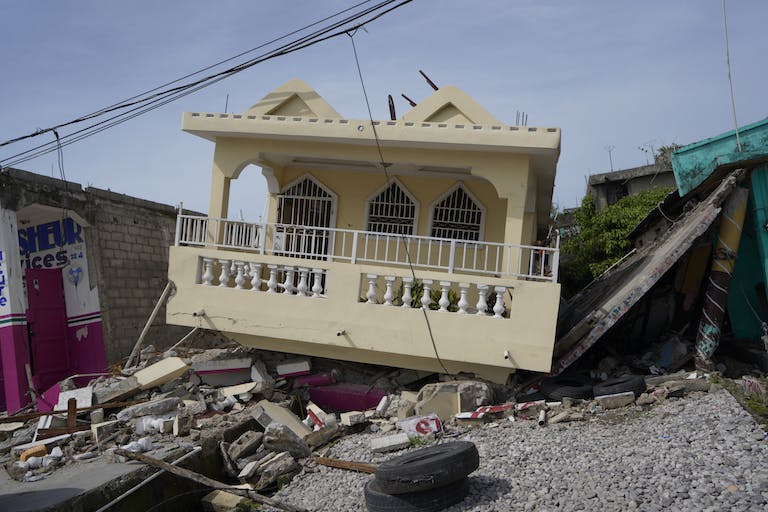 The damage is severe. Homes and buildings are left totally destroyed by the recent earthquake.

“I don’t know what we will do if people forget about Haiti.”

I recalled this statement from more than a decade ago, when I was living and working in this fragile island nation.

It was 2011, the one-year anniversary of the 2010 Haiti earthquake. I was talking with a Haitian friend who had lost everything. Jean was sitting outside his makeshift shop, perched on a pile of rubble, surrounded by the physical and emotional residue from that first devastating earthquake in this century. That one had cost Haiti more than 200,000 lives. It looked like, although a full year had passed, nothing had changed.

“How could they?” I asked shakily. I didn’t know how else to respond. I couldn’t imagine ever forgetting Haiti. Yet his question struck a chord within me that has been reverberating ever since.

If we are honest, the world’s attention had collectively “moved on” from Haiti once the literal and proverbial dust settled after January 12, 2010. Haiti appeared in the news on occasion – most notably after Hurricane Matthew and other natural and political crises.

Yet Haitians still contend daily with complicated factors – severe poverty, scant employment opportunities, and social unrest, just to name a few. More than 40% of Haitian are food insecure, according to the UN, and roughly 60% live below the poverty line.

I have thought about our Haitian friends and this vibrant place often this week, even more so than I have since I served there. I interviewed many families on that one-year anniversary date of the 2010 quake. They were still sleeping outdoors on broken concrete floors, still terrified that the shaking would start again in the night. It haunted their dreams.

Under Saturday’s nighttime sky, I looked up and imagined the thousands of Haitians who were sleeping under their sky, listening to tremors, petrified once again to sleep inside. The PTSD and trauma of that day over a decade ago must be felt so acutely. The loss, once again immense. It feels like the burden is just too great. This week, I looked up at the nighttime sky and imagined the thousands of Haitians who are again sleeping under that sky, in the open. As they listen to tremors, they are once again petrified to sleep inside. It feels like the burden must be too great. 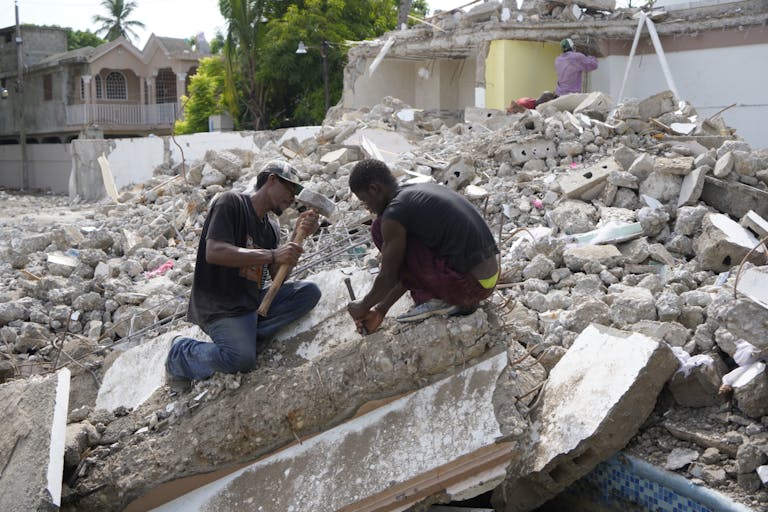 Haitians are already hard at work sorting through the rubble.

Yet Haitians are brilliantly resilient. They won’t succumb to being defeated by this earthquake or allow their spirits to be crushed. They are resourceful and deeply committed to one another. But they need help, and they will continue to need it long after the reporters return home.

How, then, do we respond?

We pray. We pray that the Lord would have mercy and hear our urgent requests for them.

We give. We give out of our abundance – out of the good gifts the Lord has given us  – because we believe and trust it is all His anyway.

And we ask ourselves: Will we choose to be a people who will be known for remembering or known for forgetting?

FH is already in the disaster zone providing critical life-saving assistance including food, water, and medical aid. You can help save lives. 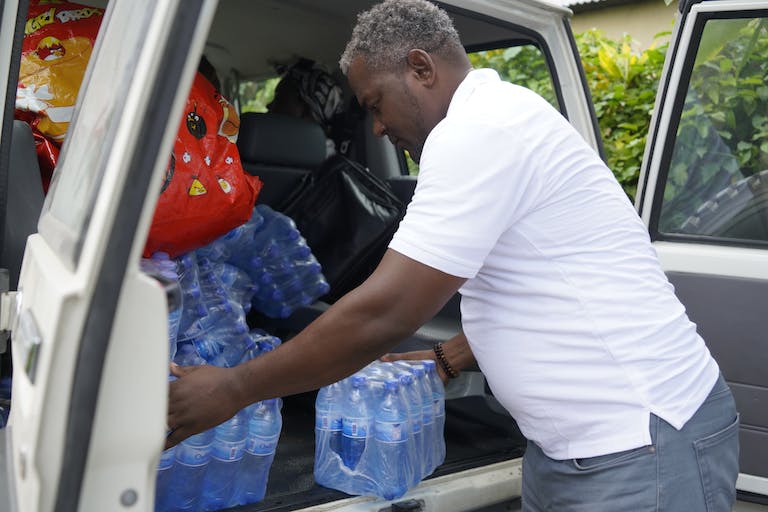 Getting drinking water to children and families in the disaster zone has been a top priority for the FH Haiti team.

Food for the Hungry has not forgotten the people of Haiti. We have been there, walking with families and caring for children in our sponsored communities. We have weathered the storms that have faced Haiti, and we remained through the interim.

And we are there now, assessing needs and delivering emergency food, water, and medical aid to those who are suffering. The need is great, and it is urgent.

In a world where there are so many needs vying for our attention, we ask you to remember Haiti.

The post Remember Haiti – After the Ground Stops Shaking appeared first on Food for the Hungry.