When the COVID-19 pandemic struck last year, the first thought of many people was for their own safety and welfare. It can be difficult to listen to the cries of the poor when we are concerned for ourselves.

In Bolivia, one of the poorest countries in the Western Hemisphere, people were very concerned. But Cinthia Villca, Education and Sponsorship Facilitator for Food for the Hungry (FH) in Bolivia, told us that Bolivian staff at FH were especially concerned for others.

“During this time, many families were shocked by the pandemic, and I saw hunger for the love of God, as well as hunger for food,” Cinthia said. 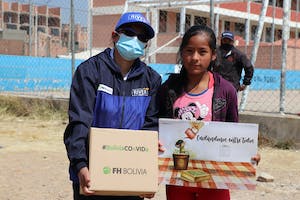 The “Bolivia Con Vida” campaign is a local response to needs voiced by vulnerable people in Bolivia.

Cinthia and her colleagues knew that other Bolivians would be hard hit by the pandemic, so they organized to provide food and emergency kits to members of communities where FH works. They called their campaign “Bolivia Con Vida,” which means “Bolivia Alive.”

The response of Bolivian staff to the poor around them reflects Scripture. Proverbs 21:13 admonishes us to listen to the needs of people living in poverty.

“He who shuts his ears to the cries of the poor will be ignored in his own time of need.” (Proverbs 21:13, TLB)

Dr. Larry Ward, who founded FH, highlighted Proverbs 21:13 in his Bible and spoke of this verse often. This year, as FH celebrates our 50th anniversary, we are looking back at some of the verses that were especially meaningful to Dr. Ward.

Let’s consider how we can put this verse into action. How can we make sure we are not shutting our ears to the cries of the poor? How can we, like our Bolivian brothers and sisters, prioritize the needs of others?

Where are the Poor?

Many of us live in communities where we rarely come in contact with real people living in poverty. When we see someone asking for money on the street, it’s because they have purposely put themselves in a position to be seen by us. But there are hungry and disadvantaged people, both near and far, who are unseen and need us to hear them.

Sometimes, the poor are in our own communities. If you don’t know where they live, find out. Check local school websites for the percentage of students who receive free school lunch. Ask your city officials or church leaders about the needs they see in your community. Pray that God would open your eyes to the cries of people around you.

There are people around the world living in devastating poverty. In an age when an overwhelming amount of information is at our fingertips, sometimes we don’t know where to look. A great place to begin is the FH website, where you can discover the strengths and needs of people in the communities we serve. Another good source is the United Nations, which offers information about progress toward the Sustainable Development Goals, including statistics about many countries.

How to Open Your Ears

The opposite of shutting our ears is opening them. To become a good listener, try some of these steps. 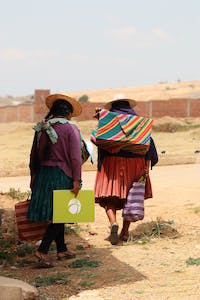 When FH staff listened to the cries of people in Bolivia, the “Bolivia Con Vida” campaign was born.

Pray that God would give you a heart to listen and understand. Ask Him to show you the needs He wants you to see.

2. Study statistics, but engage with people.

Once you know where vulnerable people live, whether in your neighborhood or around the world, learn about them. Read about the magnitude of their needs and what’s being done to help them. Then, get to know them. Don’t let statistics substitute for real human stories.

Helpers can be found everywhere, and they usually welcome more help! In your community, it may be a local church, a nonprofit community-based organization, or a government initiative. Internationally, you can get to know how FH and other organizations are helping through their blogs and videos.

Listen to the needs they’ve identified and how they’re helping.

The kindest way to help others is by providing assistance that will last far longer than the money or time you provide. Learn how to bring change that lasts through the FH resources page. Then, to provide real help to a child in a sustainable way, sign up to sponsor a child.

There are so many ways to listen to the cries of the poor. When we do, we receive blessings, too. Cinthia’s faith was fortified by what she witnessed while helping other Bolivians.

“I saw that God is in control of all situations, and that He does not abandon his children,” she said.

For Cinthia, seeing God’s active care for His people reassured her that God is trustworthy. In this way, she knew that He will also hear her when she has any need.

Other blogs in this series:

How Disturbing is Injustice?

The post How Can I Listen to the Poor? appeared first on Food for the Hungry.