Hearing the phrase “God with us” probably brings the Christmas story to mind. Specifically, it is the name Jesus was given: Immanuel, which means “God with us” (Matthew 1:23).

But these words also frequently come up in reference to the work of Food for the Hungry (FH). Vulnerable children and families experience His love and care personally and tangibly through the prayers and generosity of FH partners. Those served often say they feel “God with us” providing for them, guiding them, giving them hope through the work of FH in their community.

Just as Jesus came to live and walk among us and with us in human flesh, FH strives to accomplish the same in communities fighting to break free from extreme poverty. FH supporters and teams on the ground alike are committed to walking with people in His name through every step of their journey, loving them as Jesus does, acting as His hands and feet, and reaching out with His compassion and care.

One beautiful example can be seen in the life of Greysis, a 7-year-old girl in Nicaragua, and her parents, Hosman and Kenia.

All alone. That’s how this young family felt.

Their community is one of the most impoverished places on earth. They have little access to education, work, and other basic resources needed to break free. Hosman and Kenia had no one to turn to when times got tough. And in the midst of a harsh climate, even putting food on the table had become an impossible task.

As a result, Greysis and her little brother often went hungry. And things quickly spiraled from there. The children became sick with malnutrition, which led to increasingly frequent illness with fevers and diarrhea. Greysis was hospitalized twice in one year.

And the medical bills only added to the family’s stress. Under the additional financial strain, Hosman made the difficult decision to migrate to Costa Rica for stretches of time to work during the coffee season in order to be able to buy food for the family and pay down their medical debts.

“The biggest difficulty I face day to day is getting food for my children,” Hosman shares. “As an adult, you put up with it. But children don’t. They just ask for it and that hurts my soul when they tell me, ‘I’m hungry,’ and you have no food to give them.”

But as lonely as they felt, “God with us” was with them. He heard their cries for help. And He sent FH to walk alongside them.

“God with Us” Through Child Sponsorship

Little Greysis still remembers the day she became a sponsored child with FH.

“We joined FH in 2017. I was four years old,” she remembers. “And I was very happy because my parents told me FH was going to find me a sponsor who I would talk to through letters. They would help us to have food at home, and to be able to go to school and get medicine when we were sick. Also, they told me that we can share the Word of God together.”

And one of the best parts about sponsorship with FH is that a child’s whole family and community reaps the benefits, too.

For example, Greysis’ sponsorship opened the door for Hosman and Kenia to receive training and tools to improve their economic situation. They received two beehives from FH and a beekeeping suit for Hosman. With this amazing gift, Hosman is able to sell beeswax and honey at the local market and use the proceeds to pay for food, medicine, school fees, and other things his family needs. 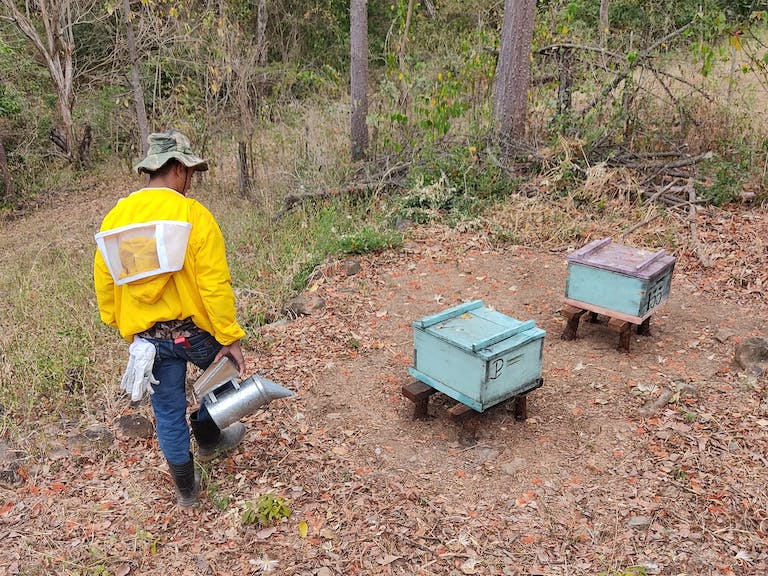 Hosman tending to his bees.

The family has also received farming tools and papaya seeds, which will produce more food for the hungry family, and more income at the market, as well. The extra income has made it possible to expand the family’s business, including buying pigs and chickens, and starting a household garden.

Greysis and her family still have a long way to go before they escape poverty for good. But child sponsorship and other gifts provided through FH have given the whole family a new confidence in themselves, and a stronger sense of God’s presence at work in their lives.

“FH has led us to recover our identity and vocation,” Hosman says, “knowing that we are made in the image of God and that we are his children, believing that we have gifts to contribute to be productive stewards of His creation, and trusting in God for provision.”

Growing in Relationship with God

“I thank God for the arrival of FH to my community because I feel that there has been a before and an after,” Greysis shares. “From the past, I only remember bad things, but now I like things I see in my family very much. I feel that there is love, peace, and food in my little house, and that makes me happy every day because I believe that God is with us.”

“First of all,” she explains, “We have God in our lives. We attend church with our parents more frequently. Before we hardly went. When I went to school in the past, I only ate bread and coffee. Now I eat eggs with gallo pinto [rice and beans]. I also suffered from coughing and diarrhea, but nowadays I hardly get sick. And I thank God that my dad doesn’t need to go to Costa Rica anymore.” Greysis says that she and her mom used to cry whenever he had to leave. 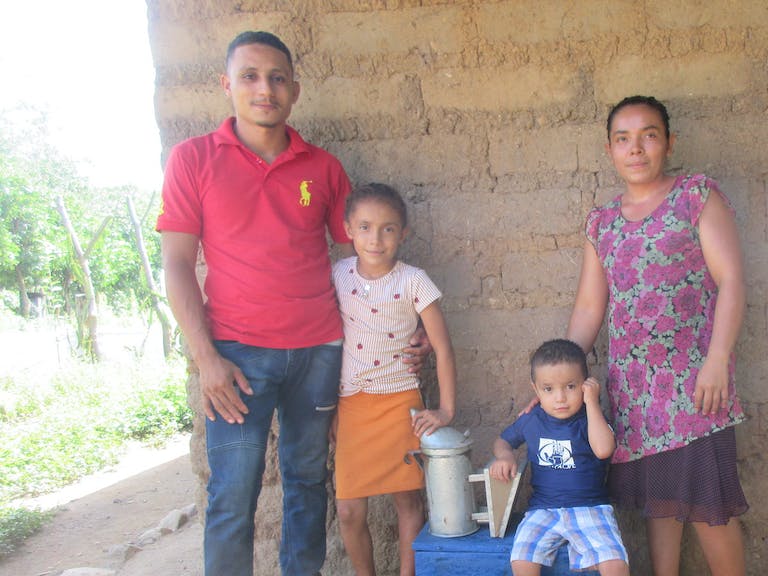 Family outside their home. They’ve experienced “God with us” in the way He has provided for their family.

Greysis’ family shares her gratitude and are filled with hope for tomorrow. “We dream of a better future where God is always with us, our children can go to school and graduate from college, that we do not lack daily bread, that we are healthy, and that our community progresses,” Kenia and Hosman share.

A Bible and Sponsorship Knit Family Together

Rebuilding After Two Hurricanes in Nicaragua

The post “God With Us” is Felt in this Nicaraguan Home appeared first on Food for the Hungry.