Community graduation is Food for the Hungry’s goal for every community.

When Food for the Hungry (FH) enters a community, it is a partnership. From the beginning, there is an “exit plan.” Eventually, the community graduates. This means they are now self-sustaining.

And that is a day of great celebration for the community!

Graduation also makes it possible for FH to enter other communities that desperately need help. The process begins again, as a new community journeys toward self-reliance. The help received is similar in some ways. But it is always tailored to special needs identified by FH and members of the communities, as they work together in partnership. 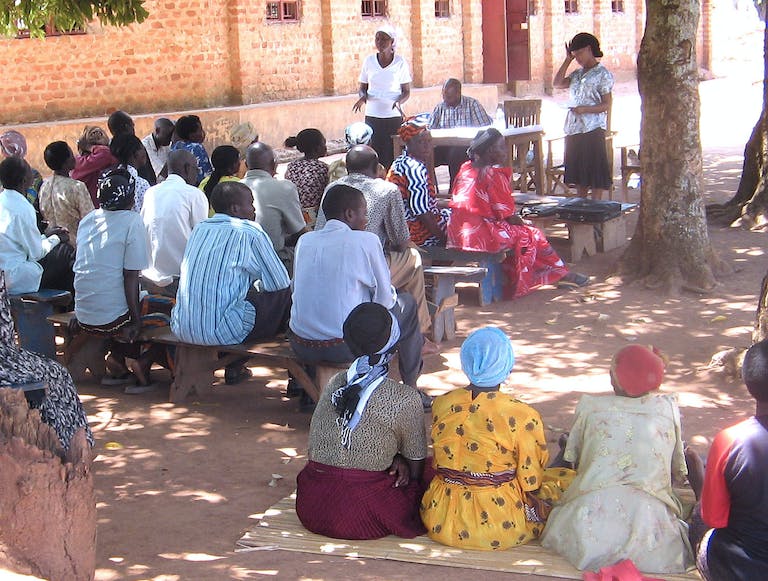 A focus group meeting with community members in 2011, when FH first started working in Kole. Meetings like this helped FH and community leaders alike identify how the community could improve life for children and families.

Neighborhood groups started by FH taught parents about clean water, safe food preparation, and nutritious meal planning. The groups built several spring wells and refurbished water systems. Today, 96 percent of residents in the Kole district have direct access to latrines and virtually all have clean water. Children in the community are growing up healthy and excited about their futures.

Few children received an education before FH arrived. Even those who were healthy enough to attend classes didn’t stay long. Several problems contributed to this. First, there were few teachers, because there was nowhere for them to live. Few students wanted to attend, especially older girls. They could not cope with the lack of school latrines or wash facilities. And only one desk was available for every five students.

FH partnered with local government to construct residents for teachers, renovate classrooms, and provide more than 100 new student desks in the region.

Because they were overwhelmed at home, most parents in the communities had not been interested in tackling the problems at the school. Once FH was involved, parents formed a parent-teacher association. Today, meetings are well attended.

Families in the three communities now look forward to a much better financial future. Today, the Kole district has dozens of resident-managed savings and loan groups, and most families participate by actively saving money. They are also able to obtain loans to expand their farms and businesses, purchase livestock, and improve their homes.

FH introduced farmers in the Kole district to coffee and banana cultivation. The first harvest was completed this year. Additional farmers in the communities were taught to cultivate bee hives and sell honey at local markets.

New ventures like these provide reliable income for the families. Most now also save money for their children’s educations.

Allan Otim was an orphan in Barakalo, one of the three graduating communities in the Kole district. Shortly after Food for the Hungry (FH) arrived here, Allan was enrolled as an FH sponsored child. He was one of the first in his country to receive an FH education grant at “primary three level.”

Allan qualified to continue in the program until he enrolled at Uganda Christian University. By then, his teachers say he “had grown into an academic giant.”

Allan, now 27 years old, recently became a lawyer. He is working at a law firm in nearby Lira City, and his goals including putting aside part of his income to give back to his home community.

Another Taste of Success

Felix Okello’s story has some similarities to Allan’s. He is also 27 years old and from Barakalo. And his success story began the same year as Allan’s, when he became an FH sponsored child.

But their journeys followed different paths. Today, Felix owns his own motorcycle mechanic shop in his newly graduated home community. And he is also using what he learned through FH to help others find success.

Felix explained that he entered FH sponsorship in 2005 and received assistance to attend school for three years. “That’s when I realized formal education wasn’t for me,” he says. But FH tailors its support based on each sponsored child’s needs.

“FH helped me to join and successfully finish a three-year motorcycle repair and mechanics training program. After completion, I was able to be employed in private shops and support myself while I also started saving.

“By 2014, I had enough money to start my own spare parts shop, including a repair and training workshop.”

Passing On What He Learned

“In those young people, I saw myself before I received training as an FH sponsored child,” he reflects. Those who successfully completed his training became eligible to work in his shop.

“Because of the encouragement, support, and guidance FH offered me, I am now a privileged person,” Felix says. “And I am in a position to help others. This is something I didn’t expect!”

Today, Felix continues to train and employee young people in his community. He’s the father of a son and is able to support him, while he also pays for the education of two of his own younger siblings.

His goal is to expand his shop into a wholesale operation. He says he will then be able to afford to buy a home and bring his family together.

FH child sponsors made success possible for Felix, Allan, and others in these graduated  communities. And those sponsors have experienced their own “graduation.” They remain committed to the mission of ending poverty, so they’ve chosen to continue to sponsor additional children in communities where FH is currently working.

In this way, they will transform more lives, as their contributions make it possible for other communities to work toward the goal of graduation and self-sufficiency.

Celebrating the Victory of Community Graduation

What Do Community Graduation and a Train Board Have in Common?

The post Community Graduation is Cause for Celebration appeared first on Food for the Hungry.